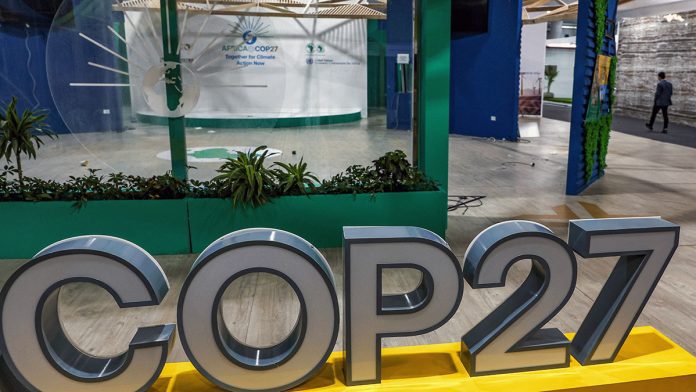 After long and difficult negotiations that went well beyond the scheduled timetable, COP27 ended this Sunday after adopting a highly disputed text on aid to poor countries affected by climate change but without new ambitions for greenhouse gas reductions .

After more than two weeks, the key UN climate conference ended more than a day ahead of schedule, making it one of the longest COPs in history.“it was not easy” But “At last we accomplished our mission”Egyptian President of the conference, Sameh Shukri, underlined.

A final declaration resulting from several compromises was eventually adopted, calling for reductions “Fast” emissions but without new ambitions compared to the final COP in Glasgow in 2021.

“We need to make drastic reductions in emissions now – and that is a question this COP has not answered,” UN Secretary-General Antonio Guterres expressed regret at the end of the climate conference. In the process, the EU told itself “disappoint” by emission agreement

A fund to compensate poor countries for climate damage

However, this edition was marked by the adoption of a symbolic resolution, described by its originators as historical, on compensation for climate change damages already faced by the poorest countries. this file “loss and damage” Conditions in poor countries nearly derailed the conference, before becoming the subject of a last-minute compromise text that left many questions unanswered but accepted the principle of building a specific financial fund.

“The loss and damage in vulnerable countries can no longer be ignored, even if some developed countries decide to ignore our suffering,” Applauded Ugandan youth activist Vanessa Nakate.

See also  US, Japan, South Korea plan to hold a meeting of ministers to deal with China

The text on emissions cuts was also hotly contested, with many countries condemning it as a step back from ambitions defined in previous conventions.

Specifically on the most ambitious objective of the Paris Agreement, to limit global warming to 1.5 °C compared to the pre-industrial era, which has been reaffirmed in the final decision.

The current commitments of signatory countries to the agreement do not make it possible to meet this objective, nor to prevent a rise in temperature of 2°C compared to the pre-industrial era, when humans largely used fossil fuels. had started. for global warming.

These commitments, assuming they are fully met, would put the world on a catastrophic path to +2.4°C by the end of the century and, at the current rate of emissions, to +2.8°C. However, with warming currently around 1.2°C, the dramatic effects of climate change are already on the rise.

The year 2022 was an example of this with its procession of droughts, mega-fires and devastating floods, affecting crops and infrastructure.

The cost of these extreme events is also mounting: The World Bank pegs the cost of the floods at $30 billion, which left a third of Pakistani territory under water for weeks and claimed millions of victims.

Poor countries, often the most exposed but which usually bear little responsibility for global warming, have for years been demanding funding for “losses and damages”.

The battle will not end with the adoption of the Sharm el-Sheikh resolution as it is deliberately vague on some controversial points.

Operational details should be defined for adoption at the next COP, promising new conflicts, in late 2023 in the UAE. Especially on the issue of contributors, developed countries are insisting that China be a part of it.

Another topic that rocked the COP: emissions reduction ambition. Many countries considered that the texts proposed by the Egyptian presidency constituted a step backwards on the commitments made in Glasgow to regularly raise the level.

“This COP has weakened the obligations of countries to introduce new and more ambitious commitments”, Lawrence Tubiana, the architect of the 2015 Paris Agreement, expressed regret.

Not to mention the question of reducing fossil fuel use, a cause of global warming but barely mentioned in most climate texts.
Coal was quoted in 2021 after tough exchanges but in Sharm el-Sheikh “The usual suspects”, In the words of one representative, once again opposed to oil and gas. Saudi Arabia, Iran or Russia are the most commonly used country names.

However, the development of renewable energy is a matter of unprecedented mention along with energy “low emission”, The expression is generally applied to nuclear power.