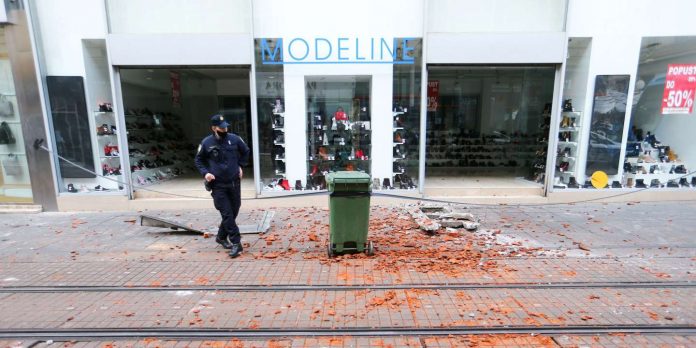 The us The Geophysical Institute USGS said that on December 29, a 6.4-magnitude earthquake struck Croatia, causing buildings to collapse in the central city of Petrinja. The epicenter of the earthquake, which occurred at a depth of 10 kilometers at about 1:30 pm, was located about 50 kilometers southeast of Zagreb, where panic-stricken people fled onto the streets.

“We are currently evacuating people from the debris, we still do not know if dead or injured.”The Mayor of Petrinza, Darinko Dambovich, told a local television station. “This is normal terror, everyone is trying to find out the fate of their relatives”, she added. Images of a city with a population of around 20,000 appeared on a broken roof and streets with bricks and other debris. In particular, the Croatian Red Cross published a video of the loss on social networks:

The help intervened very quickly in the city, where the army was also stationed. Rescuers and soldiers were searching for a victim trapped under the rubble. Power cut off in the city center.

On Monday, a small magnitude earthquake had already hit the same area, causing only minor property damage. The Balkans are a region of high seismic activity, and earthquakes occur frequently there.

According to eyewitnesses and media, the earthquake was felt in neighboring Slovenia, specifically in the capital Ljubljana, as well as other countries in the region, including Hungary and Austria. “As a precaution”, The Slovenian nuclear power plant was shut down after the earthquake, a spokesperson for the site said, without giving further details. According to the STA news agency, it is a “General Procedures in Strong Earthquake Conditions”.

Built during the Yugoslav period and entered service in 1983, the Westinghouse-type reactor at Krasko, with 700 MW of power, is the only power plant in Slovenia, which shares the site with Croatia. Its activity should have stopped initially in 2023 after forty years of operation.

Ljubljana and Zagreb, however, decided to extend their activity for twenty years, despite opposition from many NGOs. It covers about 20% of Slovenia’s electricity needs and 15% of Croatia’s.

See also  Are you fully vaccinated? These are the four most common symptoms that you have been infected with CORONAVIRUS