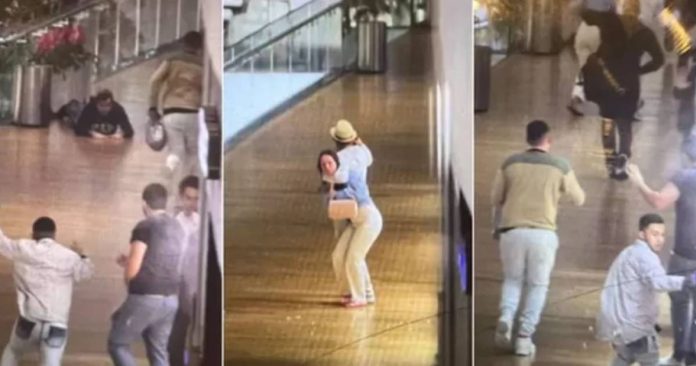 A violent robbery broke out at a shopping center in the Brazilian city of Rio de Janeiro on Saturday evening, in which customers were taken hostage and a security guard was shot and killed. A Dutch tourist who was walking through a shopping mall that day saw a view worthy of the Wild West. “It’s something you never see in Europe,” he told local media.

It feels like an action movie. However, the images of the armed robbery at the Village Mall, a luxury shopping center located west of downtown Rio de Janeiro, are very real. This Saturday, June 25, twelve armed men descended on the scene and stormed the building, astonishing the security guards and customers in the gallery. The men shouted that it was a robbery and threatened customers and employees with their weapons. Some were used as human shields so that thieves could rob a jewelry store without police intervention.

Dozens of shots were fired between the thieves and the police, according to various Brazilian media that testified to those present at the scene. A 49-year-old security guard was shot in the face and died instantly. One of the thieves was also shot by the police in the street. Many others were injured. “Everyone was in a panic”, say witnesses.

“People were running in all directions”

“We were in a shop near a jewelery store when the saleswoman suddenly ran away. She started shouting that bullets were being fired, so we also ran away. We found a way out of there,” a certain Luiza told Brazilian media. During the robbery, another witness told local reporters what he saw: “I heard a lot of gunshots. I’m with another group of people at the Apple Store. We are waiting for more information to come out.” Another person said that he hid in a restaurant to avoid bullets.

Asked by local media, a Dutch tourist, who is still in shock, explained: “It was my first day in Brazil. I was very scared. It’s something you don’t see in Europe.” According to Brazilian police, the robbers stole a number of jewels of as yet undisclosed value. They also stole a customer’s motorcycle in their escape. “Many shots were fired. People all We were running in directions, some people were taken hostage. We were so scared. The worst could have happened to us.”

Kalashnikov robbery of a Chanel store filmed by passersby in Paris

Four youths sued after robbery on the sets of ‘Lupin’