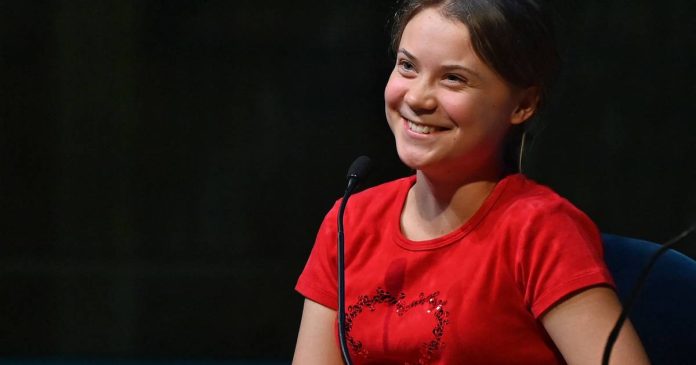 Environmental activist Greta Thunberg said on Sunday that the UN climate convention, the COP, has become a ‘greenwashing’ machine and should be used to force leaders to take action.

“Space for civil society is extremely limited this year” at the 27th United Nations Climate Conference, a Swedish activist argued during a question-and-answer session at London’s Southbank Center for the launch of her “Climate Big Book”. On Twitter, she had already expressed her solidarity with “prisoners of conscience in Egypt ahead of COP27”, which opens in Sharm el-Sheikh on November 6.

The COP, the last one of which was held in Glasgow, “is not intended to really change the system” but to encourage gradual progress that has become meaningless in the face of a climate emergency, argued the 19-year-old activist. , whose intervention on Sunday closed the London Literature Festival.

According to him, COPs have become machines for ‘greenwashing’, or communications operations, to claim that they are working on the side of the climate when it is not. A beautiful figure in a red T-shirt and jeans, the braided-haired young woman continued, “As they are, COPs don’t really work, unless they’re used as an opportunity to mobilize. “

Released Thursday, “The Big Climate Book” features nearly a hundred collaborations from climate and other experts, including economist Thomas Piketty, WHO boss Tedros Adhanom Ghebreyesus or author Naomi Klein. All royalties will be donated to a foundation in his name and then to environmental charities.

The activist says he wanted to write the book to “educate people, which is ironic my point is the school strike” during the pandemic. Repeatedly on Sunday, she called on everyone to become an activist, knowing that there are “many different ways” of doing this.

we have to change everything

“The time for small steps is over and we need drastic changes” and to get it from business leaders or governments who are interested in the status quo, “we need billions of workers”, according to him. He repeatedly reiterated that the climate crisis is not the fault of all of humanity, but of the richest, while the poorest or “historically exploited suffer the most”.

“We have to change everything, because right now our current system is on a collision course with the future of humanity. The current order is defined by colonialism, imperialism and oppression. It is still the current world order. To save the planet The world must get rid of capitalism,” she said in remarks relayed by the Telegraph at the Royal Festival Hall in London on Monday evening. Instead of going in the right direction, the world is going full speed into the wall, she warns, For example, “the amount of electricity produced from coal, the most polluting fuel,” reached a historic record last year.

International commitments leave Earth on a trajectory of warming of 2.6°C, resulting in “pathologically not equalizing”, condemned last week by the UN boss, who calls for an end to “greenwashing”, while 2022 has already seen an increase in Among climate disasters: Dramatic floods, droughts, heat waves or wildfires in Pakistan. On Sunday, the 19-year-old Swede said she never thought she was going to start a planetary motion: “One thing led to another,” she smiled.

She begins protesting outside the Swedish parliament in 2018 because she was “too shy and autistic” to join existing NGOs. “And it worked better than I thought!” With a grin, she says that she “really enjoyed upsetting people”, particularly those in power, “or who were”, such as former US President Donald Trump, who for many years his criticized. many times.

When asked about Elon Musk or Jeff Bezos, she laughs and then graciously replies that there are more pressing reasons than “spending a fortune sending rockets into space.” Finally, when asked about the controversial actions of environmental groups like Extinction Rebellion or Just Stop Oil, who have sprayed paint or soup on recent masterpieces, Greta Thunberg argued that “there are too many who are getting desperate” and so it is “reasonable to expect them to try new kinds of tasks”.

Faster than anywhere else, “Europe presents living image of a hot planet”

Towards +2.6 degree warming: “We are heading towards a global catastrophe”