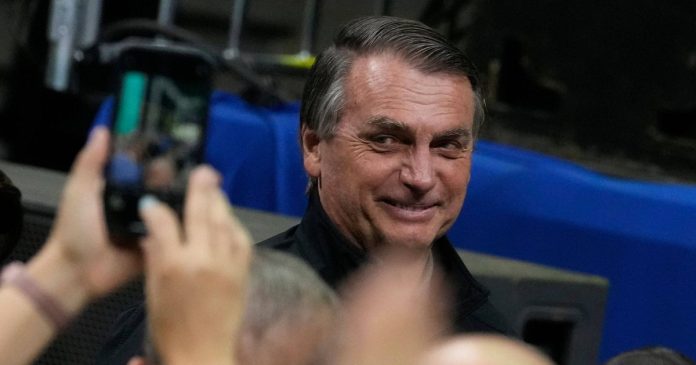 Far-right Brazilian President Jair Bolsonaro on Tuesday apologized for his remarks about underage Venezuelan girls that accused him of pedophilia from the left-wing opposition.

In a video circulated on the social network, he said, “I apologize if my words – which, in bad faith, were taken out of context – were misinterpreted or our Venezuelan sisters were embarrassed.” “

In the video, he appears with his wife Michele and María Teresa Belendria, the representative in Brazil of Venezuelan rival Juan Guaido, recognized by Jair Bolsonaro as the legitimate president of a country ruled by the socialist regime of Nicolas Maduro. Is.

“We are committed to getting the best possible for those fleeing dictatorships around the world,” said the head of state, who will contest on October 30 in the second round of the presidential election against former left-wing president Luiz Inácio Lula da Silva.

The controversy began on Friday, when Mr Bolsonaro told an anecdote from April 2021, in a poor district of Brasilia, during an interview with the Youtube channel Paparazzo Rubro-Negro.

“I parked my motorcycle on a corner, took off my helmet and started looking at girls, three or four, pretty, 14, 15, dressed as one might be in the neighborhood on a Saturday. One The atmosphere was created, I’m back, can I come to your house?, I’m in,” he said.

The expression “an atmosphere has been created”, in particular, caused an outcry on the network, with the viral video of the interview with the hashtag #Bolsonaropedófilo (Bolsonaro pedophile).

On Sunday, the president of the Superior Electoral Court banned the use of these fragments in official Lula campaign sites.

Mr Bolsonaro, who had already strongly responded to the opposition’s allegations on Saturday, assured on Tuesday that the teenage girls were not prostitutes.

Lula’s wife, Rosangela da Silva, on Tuesday tweeted an excerpt from another interview from a month earlier, in which the right-wing president was already indicating that young Venezuelan women are prostitutes.

As far as Lula is concerned, he mentioned the matter again on Tuesday. “In this case (Bolsonaro’s) behavior is that of a pedophile,” he said. “He realized it, he was scared and tried to explain himself as fast as he could,” he said during a live interview on YouTube channel Flow Podcast.