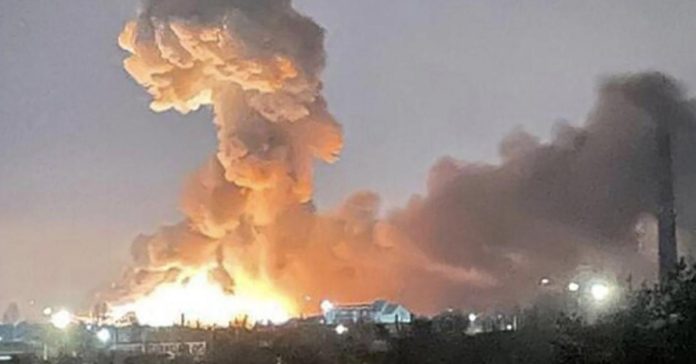 The advance of the Russian military has raised fears of a multiplication of attacks and targeted attacks on the capital and on strategic and government installations.

The day before, the Antonov military airport in Gostomel, at the gates of Kiev, was the target of an attack by Russian air forces, who arrived in helicopters and clashed with units of the Ukrainian army. Gostomel Airport sits immediately on the northern edge of Kiev, and the fighting there was closest to the capital on the first day of the Russian offensive.

During the night from Thursday to Friday, President Volodymyr Zelensky also warned of the presence of Russian “groups of saboteurs” in the city and called on residents to remain vigilant and respect the curfew now in force.

The Bank of Russia on Friday announced support measures for Russian banks sanctioned by the United States after the outbreak of the Russian invasion of Ukraine.

“The Bank of Russia and the Russian government will provide all necessary assistance to banks approved by Western states,” the financial institution said in a statement, including VTB and Sberbank, the country’s two largest banks.

7:14 am > Russia will have to “talk” to Ukraine “sooner or later” to end the fighting

Ukrainian President Volodymyr Zelensky said on Friday that Russia will have to talk to Ukraine “sooner or later” to end the fighting, as its capital is targeted by Russian bombings.

“Russia will have to talk to us sooner or later. Talk about how we can end the fighting and stop the invasion. The sooner this conversation starts, the less damage it will do to Russia.” Zelensky said in a video address.

Ukraine’s president said on Friday that Russian forces were targeting civilian areas in Kiev, lauded Ukrainians’ “valor” in resisting Russian aggression and assured that their troops would do “everything possible” to defend the country. ” Was doing.

“That night they started shelling in civilian areas. It reminds us of (the Nazi invasion) of 1941,” said Volodymyr Zelensky, uttering the sentence in Russian, to the attention of Russian citizens in a video posted on social media.

The head of Ukrainian diplomacy on Friday condemned the firing of Russian missiles that wounded at least three people at dawn in Kiev, a day after the start of the Russian offensive on the country.

“Horrible Russian missile fire on Kiev. The last time our capital experienced something like this was when it was attacked by Nazi Germany in 1941. Ukraine has defeated this demon and will defeat it too.”

Emmanuel Macron on Friday found it useful to “leave the way open” for talks with Moscow to halt its invasion of Ukraine, while denouncing the “duplicity” of his Russian counterpart Vladimir Putin.

After the EU summit in Brussels, the French president said on Thursday he had “a frank, direct, swift exchange” with Vladimir Putin, sought to “stop fighting as soon as possible” and Ukrainian “Ask to discuss” with President Volodymyr. Zelensky “Whose request was”.

He said, “I feel that it is my responsibility (…) to leave this path open when condemning, approving, continuing to act, so that the day the conditions are met, we achieve a cessation of hostilities.” can do.”

However, the French president, who has taken a number of diplomatic initiatives in recent weeks, denounced the “duplicity” of the Kremlin.

Belgium’s Vlad Polanski, who lived in Kiev for four years, testified: “Vladimir Putin is insane and psycho, he has done the unthinkable!”. View their full testimonialsHere,

Russian President Vladimir Putin is “trying to take over a peaceful European country and redraw the map of Europe by force. It has to be and it will fail,” an extraordinary European summit in Brussels dedicated to the invasion of Ukraine At the end of Thursday, Friday night, the President of the European Commission, Ursula von der Leyen said.

Hours earlier, heads of state and government gave their in-principle consent to launch a new package of sanctions intended to hit Russia “largely and severely”.

3:41 > Powerful explosions were heard in the center of Kiev

An AFP reporter said two strong explosions struck the center of Kiev early Friday, a day after Russia launched its invasion of Ukraine.

02:19 > The workers of the Chernobyl power plant were taken hostage

Workers are being held hostage there as Russia took control of Ukraine’s Chernobyl power plant, the site of the worst nuclear disaster in history in 1986, according to the White House quoted by the BBC and Reuters on Friday.

White House spokeswoman Jen Psaki told reporters during her daily briefing that there were reports of nuclear plant workers being taken hostage by Russian troops. “We are outraged by credible reports on the Chernobyl infrastructure.”

“Who is ready to fight with us? I don’t see anyone. Who is ready to guarantee Ukraine NATO membership? Everyone is afraid”, he condemned in a video address published on the account of the Ukrainian president.

He indicated that Russian troops had infiltrated Kiev the day after Moscow’s invasion of Ukraine, which had specifically attacked the country near the Ukrainian capital.

“We have received information that enemy sabotage groups have entered Kiev,” he said in a video address posted on the Ukrainian president’s account, calling on residents to be vigilant and respectful. Curfew in effect.

See also  Two pilots were suspended after falling asleep in the middle of the flight: they missed the landing in Addis Ababa