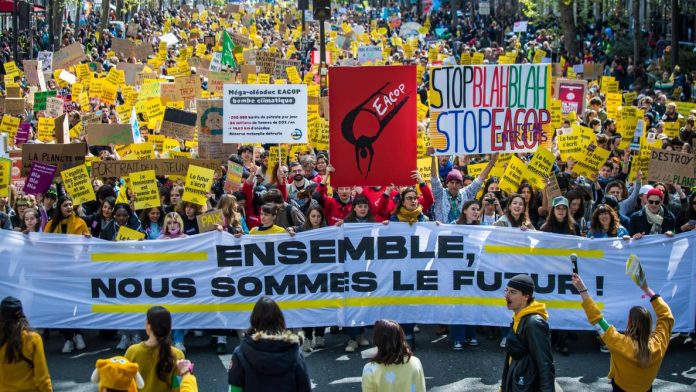 While French law has prohibited any election campaigning from Friday, large marches have been organized across France. According to one organiser, “an opportunity to talk about topics forgotten during the campaign”.

POn the eve of the first round of presidential elections with little effect on the climate emergency, several thousand protesters on Saturday marched “to the future” across France at the initiative of environmental, anti-racist, feminist and anti-indefinite organizations and collectives . ,

83 events were held on Saturday in Paris, Strasbourg, Lyon, Toulouse, with more than 300 associations, collectives, unions or local movements such as the civil movement Alternatiba, Greenpeace, Friends of the Earth, the feminist collective #NousToutes or the Abbe Pierre Foundation. .

According to Friends of the Earth spokeswoman Loret Philippot, “this is an unprecedented gathering.” “It has to be shown, at the end of this five-year term and at the beginning of the next one, the root of these problems is the same. And if today we are not allowed to talk about candidates, it is a matter of talking about those topics. There is also the opportunity of those who were forgotten during the campaign.In fact, the law prohibits any election campaign from midnight on Friday.

read also
French presidential election: the first round, each with its own mission

We have seen environment candidate Yanik Jadot carefully paraded behind the truck of his party EELV. According to those around him, Jean-Luc Mélenchon also “passed quickly and carefully”.

“We don’t give voting instructions, but you have to participate,” said Yousef Brakney of the Adama committee. “It is this economic and political system that gives rise to all these oppressions”. These marches, unprecedented and unitary, would have gathered a total of 60,000 protesters according to the organizers.

In Lyon (1,600 people according to the province, 3,000 people according to the organisers), a procession punctuated by slogans, brass bands and hail crossed the Rhne, sometimes under cold showers, to reach the city’s largest Place Bellecour. . Greppis pulled out the giant globe that had previously guided the Lyon March. To respect the political reserve of the setting, the organizers took care to avoid the flags of political parties.

“Let’s not add oil to the fire”, “They destroy the living, let’s destroy the mighty”, said the multicolored placards, or even: “The end of the world, the end of the month, same fight “, according to the Alternatiba banner, the main organization organizing the march.

In Bordeaux, protesters (3,000 according to the organisers, 900 according to the province) went under the sun. “Whatever happens at the election level, it is too late. The GEC (Intergovernmental Group of Experts on Climate Change, editor’s note) gives three years to reverse the curve of carbon emissions”, explained a spokesman for the collective “there is still time” and a member of Extinction Rebellion, to AFP.

In Strasbourg, about 300 people, according to the prefecture, marched to cry “we are hotter, hotter, hotter than the climate” and behind a Greenpeace banner declaring “climate: stop blabla, a place of deeds”.

Flags of the CGT and ATAC Association were also visible in the ranks of protesters, as well as activists wearing green caps, protesting Grand Bypass West (GCO), a motorway bypass of the Alsatian capital.

In Toulouse, they were about 900 people per province, and formed a long human chain to the Place du Capitol.