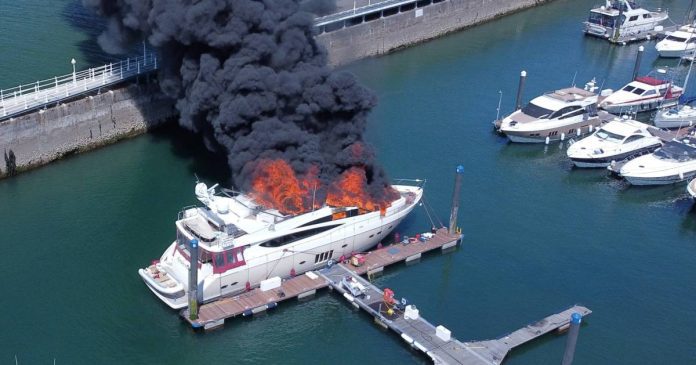 The luxury yacht has been valued at 7 million euros after a fire broke out in England this Saturday. The boat, named “Rendezvous”, was towed to the marina of Torquay, a popular seaside resort in the country. A huge cloud of smoke was rising from the yacht, which sank on the spot.

The fire brigade personnel reached the spot on Saturday afternoon after getting information about the fire in the 26 meter long boat. Despite taking hours to put out the fire, the million-euro yacht was completely engulfed in flames. This caused a huge cloud of smoke, forcing people to leave the port area and the surrounding beaches.

After this fierce fire, the ship broke away from its pier and sank into the harbour. According to eyewitnesses, several explosions were heard. Local residents were asked to keep their windows and doors closed.

The ship sank around 6 pm and the fire was brought under control. Environmental Services are now in the process of removing the debris. An investigation has been started to ascertain the cause of the fire. According to the police, there were no casualties.